The tropical cyclone Maria, a category 5 hurricane with winds in excess of 150 mph (250 km/h), made landfall in the country of Dominica on September 18, 2017 with disastrous consequences.

Most of the country was devastated, the storm having destroyed or severely damaged many critical public infrastructures as well as numerous personal homes. Within just a few hours, the local inhabitants went from living a normal life to becoming stranded in the remains of their own home, in most cases without a roof above their heads to protect them and their families from the elements, while experiencing the complete loss off essential services such as running water, electrical power and telecommunications. Due to the sheer expanse of the storm’s damages, the pre-existing normal living conditions of the inhabitants are not expected to be re-established for months or years to come.

The objective of the REZDM project is to provide support to the communities of Dominica in their current recovery efforts with a focus on establishing long term resilience to the devastating impacts of natural disasters like hurricane Maria.

In order to be as effective as possible, the REZDM project will focus its initial efforts in the village of Soufriere, with possible expansion to the villages of Scotts Head and Galion, all located in the south of the island and one of the regions most severely affected by hurricane Maria.

A local in-situ REZDM team, based in Dominica, ensures that the research and project interventions are evaluated on site and with full awareness of the reality of the environment in which the project is operating and the actions implemented.

The REZDM team is lead by one Project Manager and answers directly to the Daniel Langlois Foundation, the organization spearheading the project and its main financing channel. Read more about REZDM here. 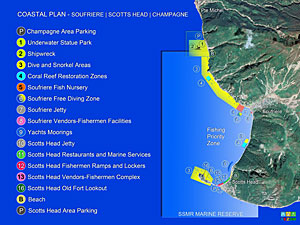 REZDM currently has a number of projects in the pipeline, at various stages of development. Each project is a part of the overall objectives of REZDM to make the communities in the south of Dominica more resilient and better equipped to deal with natural disasters. In order to achieve long lasting improvement in environmental resilience REZDM believes that some fundamental community services must be available from the start, especially for the children who have experienced the devastation caused by hurricane Maria and who need to see that a better future is possible. This next generation must have the proper conditions to acquire the knowledge to build upon and continue the resilience efforts that will have been done in the aftermath of Maria. Read about our Projects here.