HomeNewsCats & Dogs: Spay and Neuter Clinic for the Southern District

Cats & Dogs: Spay and Neuter Clinic for the Southern District

On Thursday, April 26, 2018 the Humane Society of Dominica is collaborating with REZDM and the Dominica Government Veterinary Unit to hold a spay and neuter clinic for the Southern District, deeply affected by Hurricane Maria in September 2017.

Following the destruction of 90% of the district’s homes and the displacement of families, domestic pet population has soared and the increase in the number of roaming cats and dogs has a direct impact on the ability of local wildlife such as small reptiles, iguanas and birds, to come back to their pre-hurricane levels.

In keeping with Dominica’s goal of becoming the first resilient island nation, able to rebuild and sustain its rich and balanced environment, this spay and neuter clinic is a first step, humane response to the pet population boom. With the participation of the local school children, the clinic will also be used by the Humane Society of Dominica and REZDM as a teaching tool about the importance of spaying and neutering for the long term control of local pet populations. 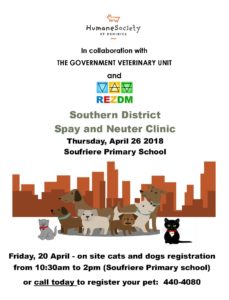